(Oddly, two consecutive posts indirectly related to sports -- which I have no interest in.) Who do the Blazers think they are? They are actually shopping for handouts from cash-strapped state and local governments. Paul Allen's company is begging for money from the governor, mayor, and even Metro (i.e. the garbage & convention center agency). During an election year (at least for the governor and some city council positions), politicians seem to be very careful to emphasize that they are NOT willing to subsidize an entertainment business that has a billionaire owner and bad-acting, over-paid millionaire players:

[City of Portland Mayor Tom Potter] said the financial condition of both the team and the city were discused. While the mayor indicated that the city could not afford to provide public support for the franchise, he added he was "looking at other options." -- KGW.com

"I think (a public-private partnership) is a nice way of asking for a subsidy," [Metro President David Bragdon] said. "I was pretty clear with them that would not be likely to be forthcoming from our agency." -- The Oregonian/OregonLive.com

In other words, 'Are you crazy? Taxpayers subsidize Paul Allen's bad investment?'.

[Pat Egan, Oregon Governor Ted Kulongoski's chief of staff]: "What would leave them with the impression that there are opportunities for public (financial) support at this moment in time -- I'm left at a loss." -- The Oregonian/OregonLive.com

In response to speculation that the Blazers are disclosing their bad finances in a desperate plea for the public's support. The Blazers are even begging Multnomah County Chairwoman Diane Linn who already regrets an earlier Blazers incident in which she received national attention for repeatedly mispronouning the coach's name. Maybe the Blazers can hit-up Portland Public Schools while they at it.
Posted by Norm! at 2/24/2006 03:10:00 PM No comments:

The last time I actually enjoyed watching an Olympic game was in 2000 when I visited Tammam in Montreal. The Canadian broadcast was relatively simple. No overly sappy Canadian athlete profiles and no talking heads who distracted from the actual Olympic events. The Canadian network (I don't remember what network it was) simply broadcasted the actual Olympic events -- even events in which no Canadian athletes were featured. Unfortunately, NBC execs think the Olympics is too boring for 'merican viewers, so they launch yammering Bob Costas, made-for-TV dramatic athlete profiles, and edit the competitions as if they were reality TV show highlights. I know I'm not alone in my criticism. Afterall, NBC's ratings are so poor that some network executives should lose their jobs. The Nation's website posted an article, The Olympics We Missed, by Dave Zirin which covered most of NBC's offenses which included jingoism, tape delay, idiotic sport choices, and the elevation of undeserving 'merican athletes like Bode Miller.

..Moldy Nationalism: It's amazing. America has never been a more dynamic, multicultural society and the world has never been more of a global village, but NBC still treats the games as if it were 1980 and the United States were taking on the Eastern Bloc. As Florida writer Pierre Tristam wrote in his blog, "NBC covers the Olympics the way American neocons do foreign policy: The world is 95 percent America, 3 percent water, and 2 percent everything else. America's projection onto the world is mostly as an emblem of force, preferably unrivaled....

If the Olympics had not sold itself to NBC, it would have been nice for viewers to have been able to select their own coverage of the Olympics.
Posted by Norm! at 2/23/2006 07:27:00 AM No comments: 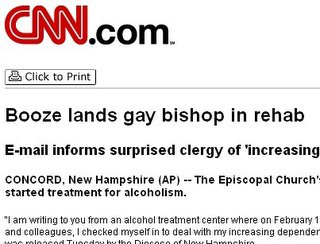 One of the top internet news headlines yesterday was about Episcopal bishop V. Gene Robinson's announcement that he has checked himself into an alcohol treatment center. During the day, it made the top ten national headlines of the news services I read (Yahoo!, CNN.com, etc.). CNN.com's headline was particularly harsh. Why was this big news? Afterall, alcoholism is, unfortunately, a fairly common condition. There has not been any reports of a significant scandal relating to Bishop Robinson's alcoholism. It's difficult to imagine such an announcement coming from any other religious leader in a similar position receiving as much attention. Of course, Robinson's story was big news because of his notoriety of being the first, openly gay Episcopal bishop. Anti-gay forces immediately used Robinson's admission as an additional reason why he is supposedly unfit to be bishop:

BUT THE BIG NEWS of the week was the announcement by New Hampshire Bishop V. Gene Robinson that he was an alcoholic and had checked himself into a rehab center. His acknowledgement stunned the church. No one knew, apparently, and it was never unearthed in statutory background checks when he was running for bishop. I suppose that must be in the category of "don't ask, don't tell." ... A homosexual, alcoholic bishop is lauded by his parishioners for his courageous example? Are there not some generally accepted 'above reproach' standards for church leaders?" . . .

-- excerpt from a posting by David W. Vitrue, VirtrueOnline.org

Well looks like the world's first "openly gay bishop" has been drinking way too much of the communion wine. Bishop Vicky Gene Robinson of New Hampshire is being treated for alcoholism. . . . Maybe the pressure to be the gay christian poster boy proved too much. We can only hope that he will kick his drinking addiction and while he's at it make the change from his sinful homosexuality. . .

-- excerpt from DL Foster's blog
By simply being "the first", Bishop Robinson has subjected himself to enormous scrutiny, which probably contributed to drinking problem. I have to admit that I'm a little jaded whenever I hear about the courageousness of 'the firsts' (the first women, the first racial minority, the first openly gay, the first disabled, etc.). I sometimes forget that being "the first" is not just a statistically significant event, but a testimony to overcoming real obstacles. Yesterday's exploitation of Robinson's admission is truly evidence of this. Although we don't know all the details regarding Robinson's admission. I would argue that his ability to recognize his own unhealthy dependency and to openly seek treatment is a credit -- not a negative -- to his qualifications to be a religious leader. Although we would all like to believe religious leaders are Christ-like figures (or other perfect, supernatural beings), seeing how these people deal with real-life challenges is a more significant testimony to me.
Posted by Norm! at 2/15/2006 10:41:00 PM 2 comments:

There is an interesting article by Ben Popper in the weekly newspaper, The Memphis Flyer, regarding the Love In Action controversies (see: Queer Action Coalition's blog). It follows up on the DJ Butler controversy. Apparently, Butler ranaway from home in Georgia so his parents handcuffed him and forced him into LIA. Butler also alleges that his father somehow obtained a Prozac prescription which LIA administered to him. Butler has since left LIA and may have been emancipated from his parents' legal authority. The article also mentions the litigation between the State of Tennessee and LIA. In response to a similar situation in which a young teen, "Zach", was forced into LIA, the Tennessee launched an investigation into the services LIA was providing. Since LIA has agreed not to treat mentally ill patients, TN stopped taking action against LIA. However, LIA believes its constitutional rights have been violated because it is a religious organization. What is really interesting to me, is that the TN vs LIA legal issues may finally force an 'ex-gay' ministry to define itself and the treatment it provides. If LIA is simply a religious group, then its 'ex-gay' program is a faith-based cure akin to faith healing. However, if LIA also poses as providing a type of conversion 'therapy', then it should be subject to the same guidelines as all other professional counseling services. Regardless, no child should be forced into religious indoctrinationor experimental therapy.
Posted by Norm! at 2/13/2006 11:38:00 AM No comments:

In preparing for my weekend trip to Seattle with Scott this weekend, I found an article by Bruce Bawer in Seattle's weekly newspaper, The Stranger. I read Bawer's 1997 book, Stealing Jesus: How Fundamentalism Betrays Christianity, about the same time I began to reconsider the Christianity I had been raised into. Stealing Jesus provided an excellent and very readable analysis of how American Christianity was overtaken by fundamentalism and consumerism during the twentieth century. Contrary to what many American churches would have us believe, their fundamentalist doctrines are not 'old time religion', but relatively new doctrines. Now it appears Bawer is taking on Islamic fundamentalism. In The Stranger article, "All The Rage: Islamic Fundamentalists Don't Just Have a Problem With Cartoons, They Have A Problem With Freedom", provides an alarming account how Islamic fundamentalists intend to take over Western culture and freedoms:

On the contrary, what’s happening here is that a gang of bullies—led by a country, Saudi Arabia, where Bibles are forbidden, Christians tortured, Jews routinely labeled “apes and pigs” in the state-controlled media, and apostasy from Islam punished by death—is trying to compel a tiny democracy to live by its own theocratic rules. To succumb to pressure from this gang would simply be to invite further pressure, and lead to further concessions—not just by Denmark but by all of democratic Europe. And when they’ve tamed Europe, they’ll come after America.

After all, the list of Western phenomena that offend the sensibilities of many Muslims is a long one—ranging from religious liberty, sexual equality, and the right of gay people not to have a wall dropped on them, to music, alcohol, dogs, and pork. After a few Danish cartoons, what’s next?

Make no mistake, this is no isolated incident. It’s one step in a long-term effort by extreme Muslim forces to erode Western liberties and turn free, affluent countries into mirror images of their own dysfunctional dictatorships. “Muslims have a dream of living in an Islamic society,” declared a Danish Muslim leader in 2000. “This dream will surely be fulfilled in Denmark…. We will eventually be a majority.” (Or as a T-shirt popular among young Muslims in Stockholm puts it: “2030—then we take over.”)...

The article comes off as alarmist, but I think there are valid points. Afterall, some Islamic protesters have even demanded that Western countries outlaw all criticisms of Muhammad.
Posted by Norm! at 2/11/2006 08:56:00 AM No comments: